Gregory Hancock Dance Theatre’s pre-professional company, G2, competed this weekend in Indianapolis City Ballet’s competition. Six of our eight members of G2 performed solos, 2 Classical variations and 4 Contemporary solos. All eight members performed in an ensemble piece – Accusation from Joan of Arc, which they performed back in June for G2 in Concert. The faculty of The Academy of Gregory Hancock Dance Theatre is very proud of the dancers and their performances this past weekend. 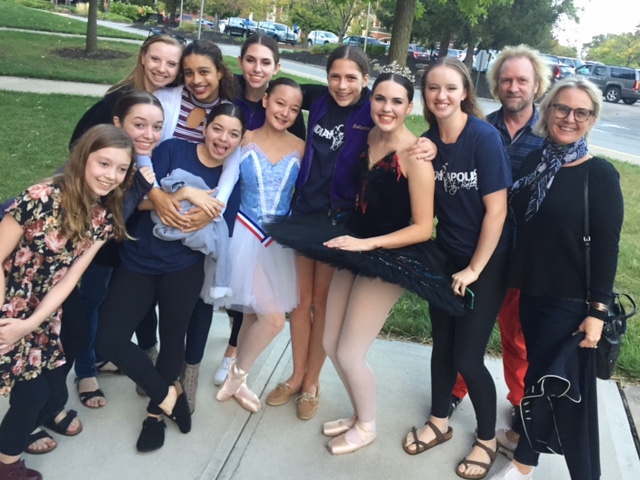 Behind the Dances of CELEBRATION

The Pieces of CELEBRATION

Gregory Hancock Dance Theatre is celebrating 20 seasons of artistic choreography and dance! There are over 130 pieces in the GHDT repertoire choreographed by Artistic Director Mr. Hancock. Some pieces have been performed only once, but many others have been performed multiple times in various concerts based on popularity and/or concert design. Many patrons have followed the works of GHDT for the entire 20 years and find the concert experience to be inspiring, entertaining and thought provoking. For those who are first time GHDT patrons, CELEBRATION, will provide a peak into the past with a selections from the “classics.” A new work by Gregory Hancock will premiere during CELEBRATION. See the ever evolving artistry of the dancers during this intense, high energy, and encompassing concert.To buy tickets, click here. 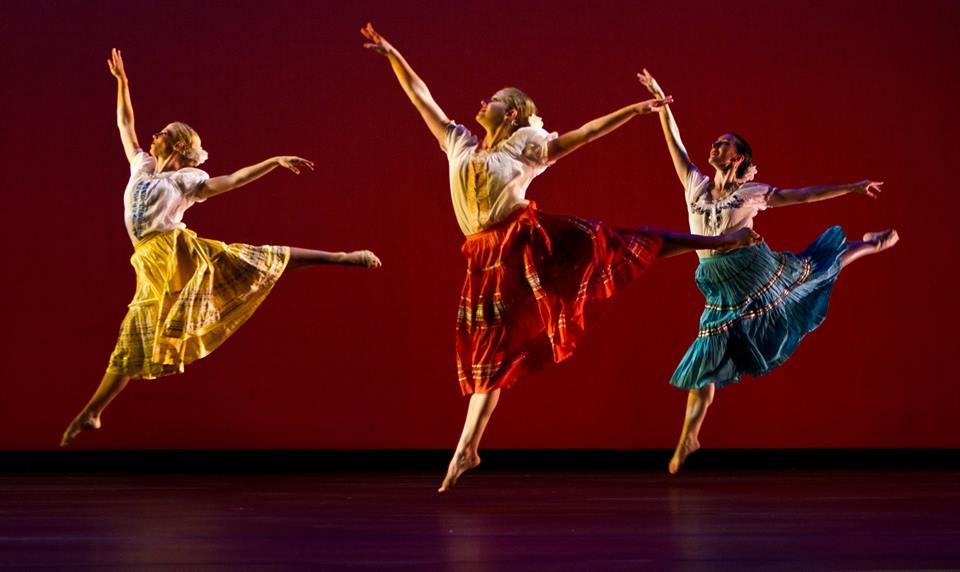 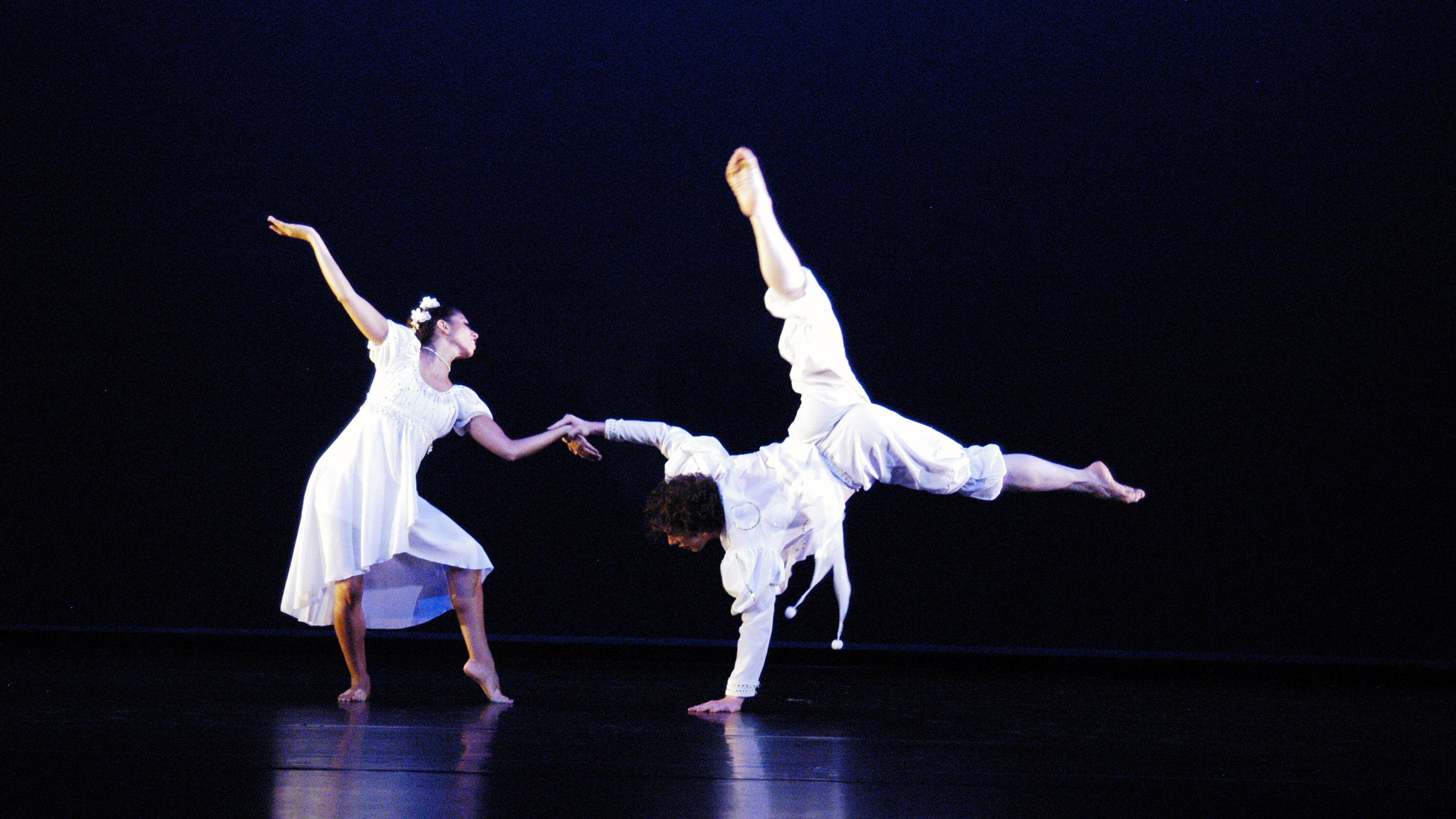 The title refers to a period of time from January to August in 1968 in the former Czechoslovakia which became known as the “Prague Spring”. With the election of new government in January of 1968, the Prague Spring begins a brief period of reform with freedom of speech, press and artistic creativity, but comes to an abrupt end with the Russian invasion in August. The dance depicts the lives of people who are manipulated and controlled by the government. With the newly found freedom, the couple has difficulty understanding their new life. The transition to freedom is ultimately achieved only to be quickly taken away again by political control. In addition to the political tone of 1968, other typical Czech motifs have been utilized such as the marionettes, which are world-famous in Prague, and contemporary Czech music.

Every Moment… Every Day… 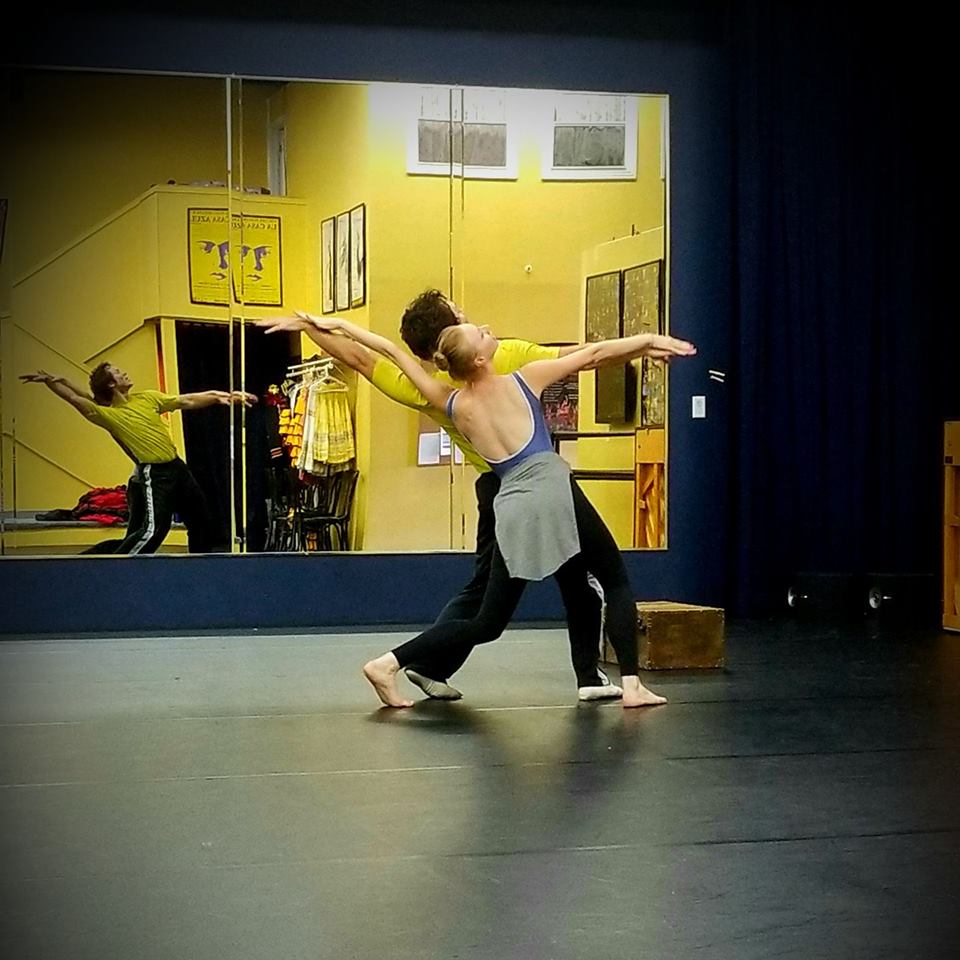 This is a world premiere piece, the latest in Mr. Hancock’s repertoire. Loss…grief…and love. There is no ending to any of these. We think we understand, but we do not. They simply continue every day and every moment for as long as we remain. At some point in life, everyone will carry something. Sometimes it is easy to see, and other times it is in invisible.

“cuchi cuchi” was inspired by the famous words of Charo, a Spanish-American actress, comedian, and flamenco guitarist. The piece was performed at the Latvian National Opera House for the President of Latvia in 2006 when GHDT was representing the USA at the 11th International Baltic Ballet Festival. “cuchi cuchi” is a fun, lively, and at times, comedic piece sure to have audience members dancing in their seats. 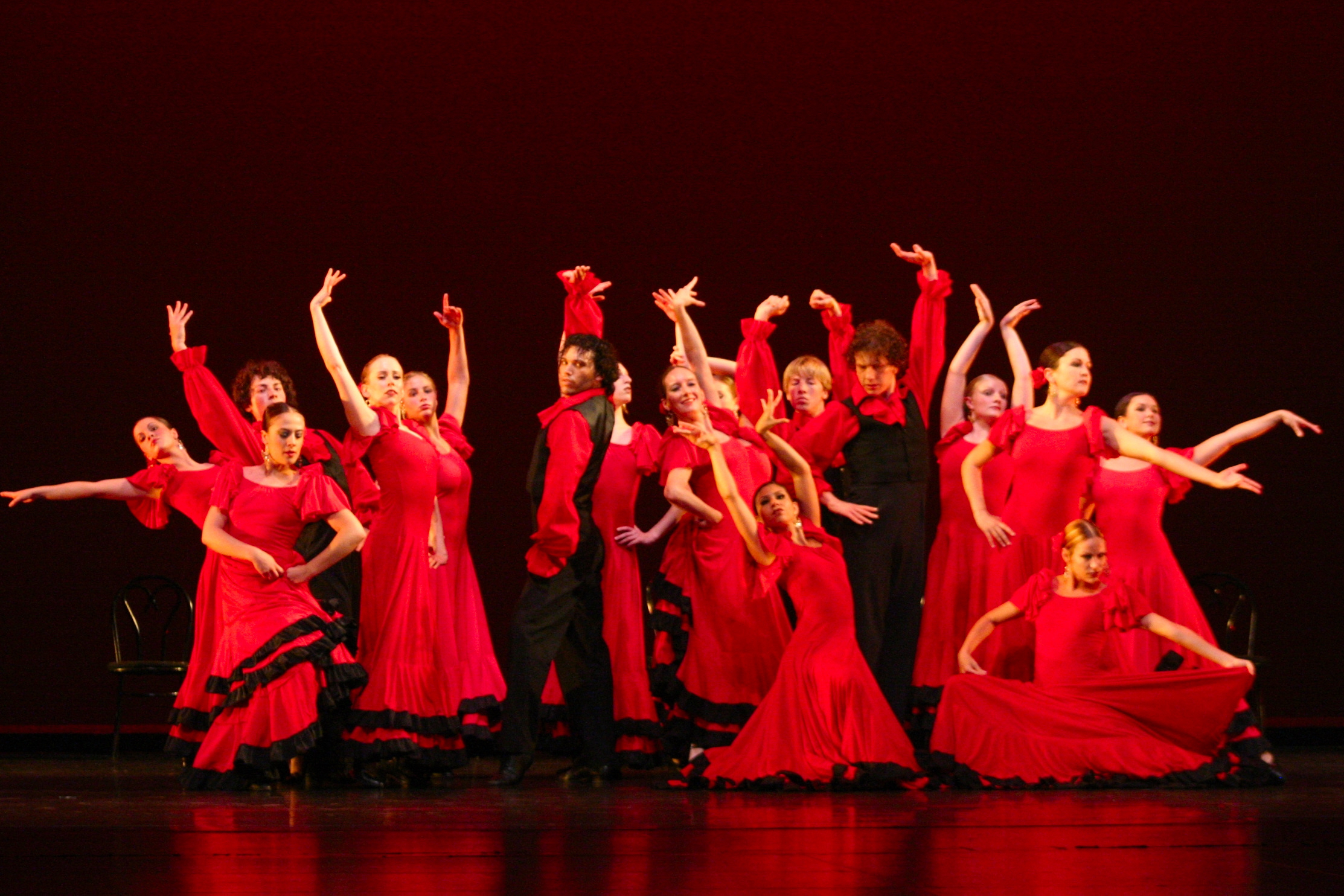 Bolero is a Flamenco inspired piece that uses rythmic snaps, claps, and stomps, alongside smooth and fiery movements. BOLERO is both a dancer and audience favorite and has been performed with various cast sizes from seven to 32.

Gregory Hancock Dance Theatre welcomes three new company dancers for their 20th Anniversary Season! Read their exciting stories below! Come see them perform in the season opener “CELEBRATION!” on September 22 & 23 at The Tarkington. Buy your tickets for the performances here! 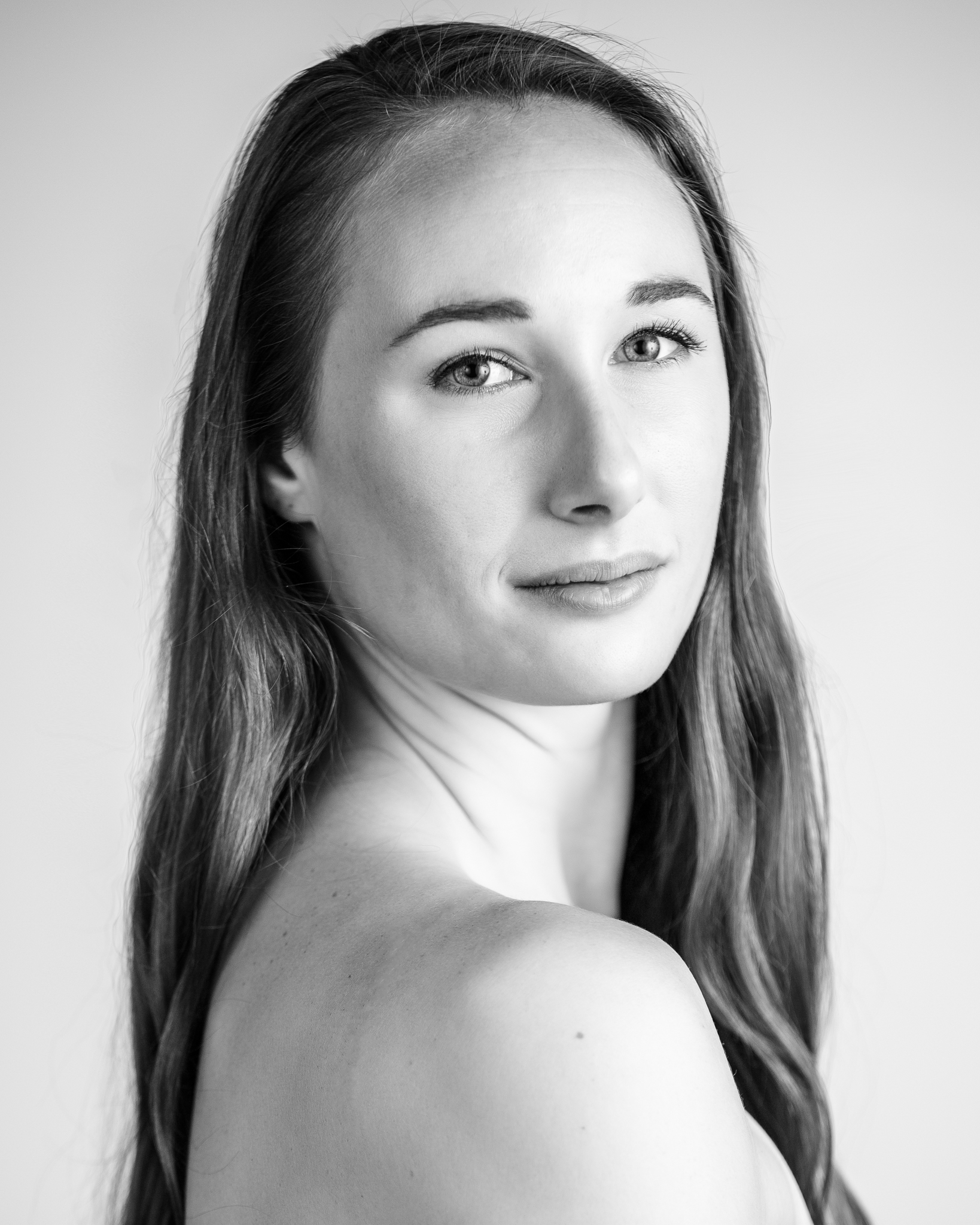 Morgan Beane began her dance training in Rochester, Michigan with the Michigan Ballet Theatre. Morgan later attended Marygrove College where she graduated Cum Laude with a degree in dance theatre performance. Immediately following graduation, she joined the Dayton Contemporary Dance Second Company, where she performed and trained for a season. Morgan then moved back to Detroit to continue to perform and teach as a guest artist with various local companies throughout the Detroit Metro area. In May of 2017, Morgan joined GHDT as an intern and performed in the popular production of “A Night in India” in June. She joined GHDT this fall as a company member.

Look out for Morgan’s solo in Cuchi Cuchi in CELEBRATION! 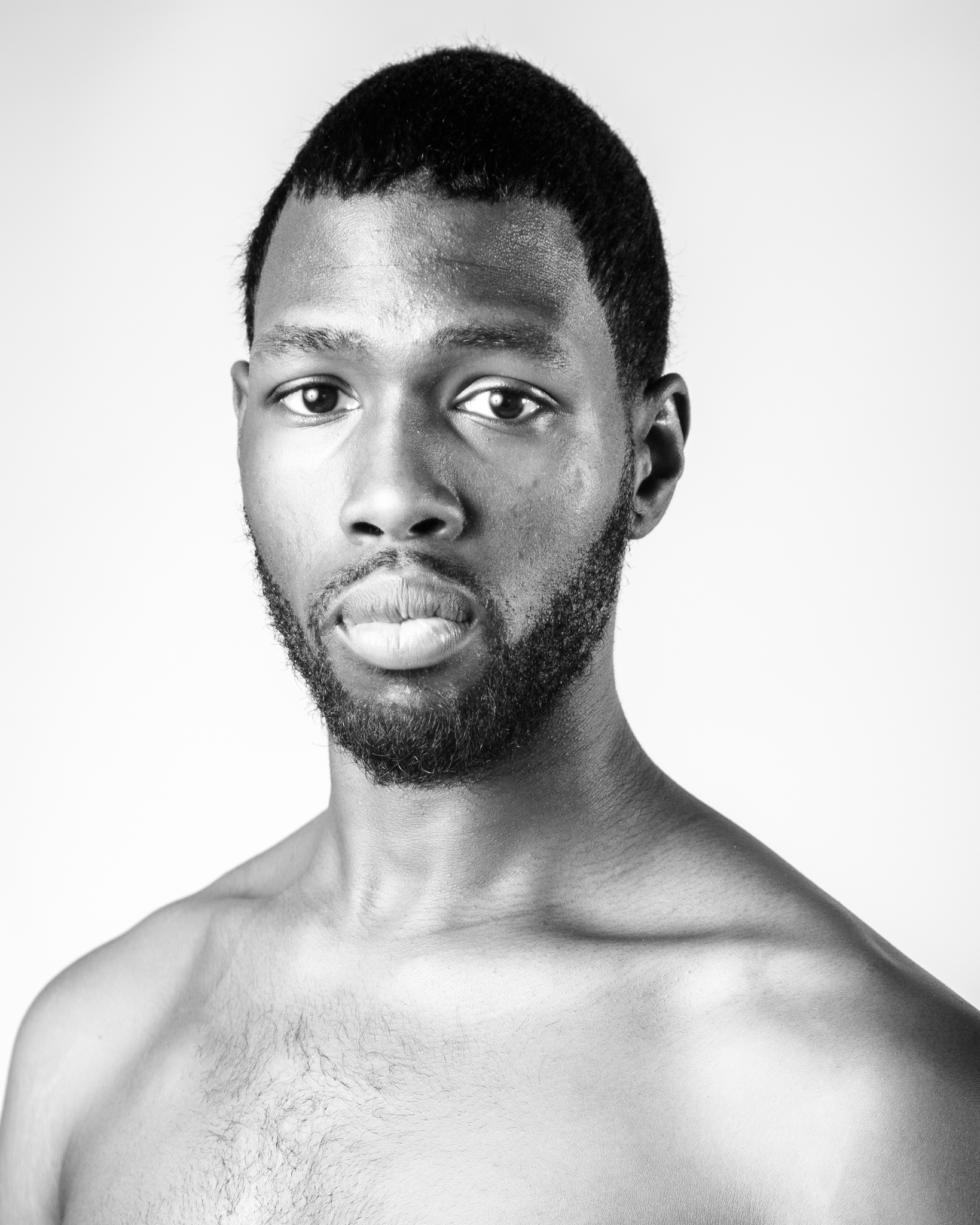 A native of Mobile, Alabama, Tyler McCants began his dance training as a young student and continued through high school. He was accepted into the Department of Dance at the University of Southern Mississippi under scholarship. Tyler graduated in 2014 with a B.F.A. in Performance and Choreography. After college, Tyler performed as a guest artist with Hub Dance Collective. He also worked and toured with Top 10 Dance Challenge, a dance competition and convention. He has performed in Dance Festivals in New York City and Kalamazoo. He joined GHDT in 2017 and performed with GHDT in “The Black Dahlia” last February as “the doctor.” 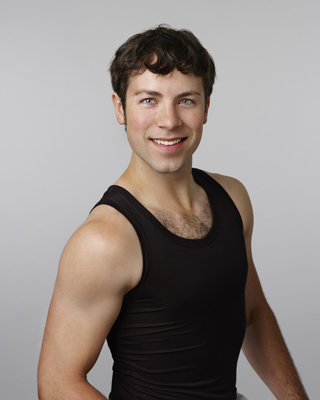 Chris Lingner began his career joining the 2009 National Tour of Twyla Tharp’s Moving Out, dancing the principal roles of Eddie and James, making him one of the youngest performers to ever dance these roles. Lingner has been a featured guest artist with Gregory Hancock Dance Theatre, Indianapolis School of Ballet, New Albany Ballet, Peoria Ballet, in the Young Stars of Ballet Gala, presented by Indianapolis City Ballet and Chamber Dance Project in D.C. In 2012, Sonya Tayeh created a new work on him for an NFL Super Bowl-Super Cure event fighting breast cancer. Lingner studied ballet in the Jacobs School of Music at Indiana University where he danced principal roles in works by Twyla Tharp, George Balanchine, Paul Taylor, Dwight Rhoden, August Bournonville, Josh Bergasse, Antony Tudor, Nicolo Fonte, and Peter Martins . Lingner joined Cincinnati Ballet in the 13-14 50th Anniversary Season in the Corps de Ballet. Since joining Cincinnati Ballet, Lingner has performed in works by Adam Hougland, Victoria Morgan, Trey McIntyre, Septime Webre, Viktor Plotnikov, Jessica Lang, Jennifer Archibald, Annabelle Lopez Ochoa, Yuri Possokhov, and Kirk Peterson. As a producer, Lingner was also nominated for a Tony Award as a member of the producing team for Broadway’s “On the Town” and “Best Show of 2016″ for his production of the first Ballet Royalty Gala in Havana, Cuba. Lingner is thrilled to return to the GHDT stage for it’s 20th season as he was a part of the original cast of both “Hunchback” and “Super Hero” and couldn’t be happier to celebrate the works of GHDT.

Gregory Hancock Dance Theatre is celebrating its 20th Season! To kickoff this exciting anniversary, the company is presenting “CELEBRATION!” on September 22 & 23 at The Tarkington in Carmel, Indiana. Artistic Director and Choreographer Gregory Hancock selected “classic” pieces from 20 years of repertoire for the company to perform. An audience favorite, “Bolero” will return to the stage as well as “1968” – both retrieved from the masterpiece archives. The concert will feature drama, precision and high energy dancing and will provide an amazing experience for everyone!

Join us in celebrating the 20th GHDT Season! All performances begin at 7 p.m. Tickets can be bought by clicking here, or by calling The Tarkington box office at 317-843-3800.

Mr. Hancock, the company dancers, and G2 dancers can not wait to celebrate our 20th Anniversary Season with our patrons. We will see you on September 22 & 23 to kick off the season of CELEBRATION!

Nutcracker season is just around the corner! In past years, Nutcracker cast members have participated in a concert fundraiser to help pay for production fees. This year, we’re doing a little bit of a different fundraiser. We’re reaching out to local restaurants to partner with them to raise money.

Our first event is September 30th from 5pm-9pm at Chipotle Mexican Grill on 12697 North Pennsylvania Street Suite 100, Carmel, IN 46032. The event is at this location only. To have your purchase count towards our fundraiser, you MUST bring the flyer below (click here to print) or have it pulled up on your phone.

Here are a few more guidelines about this event:

We are in the works of getting a few more events set up. A master list of all of the events will be posted in a month or so, so keep you’re eye out for opportunities to help raise money while eating delicious food! 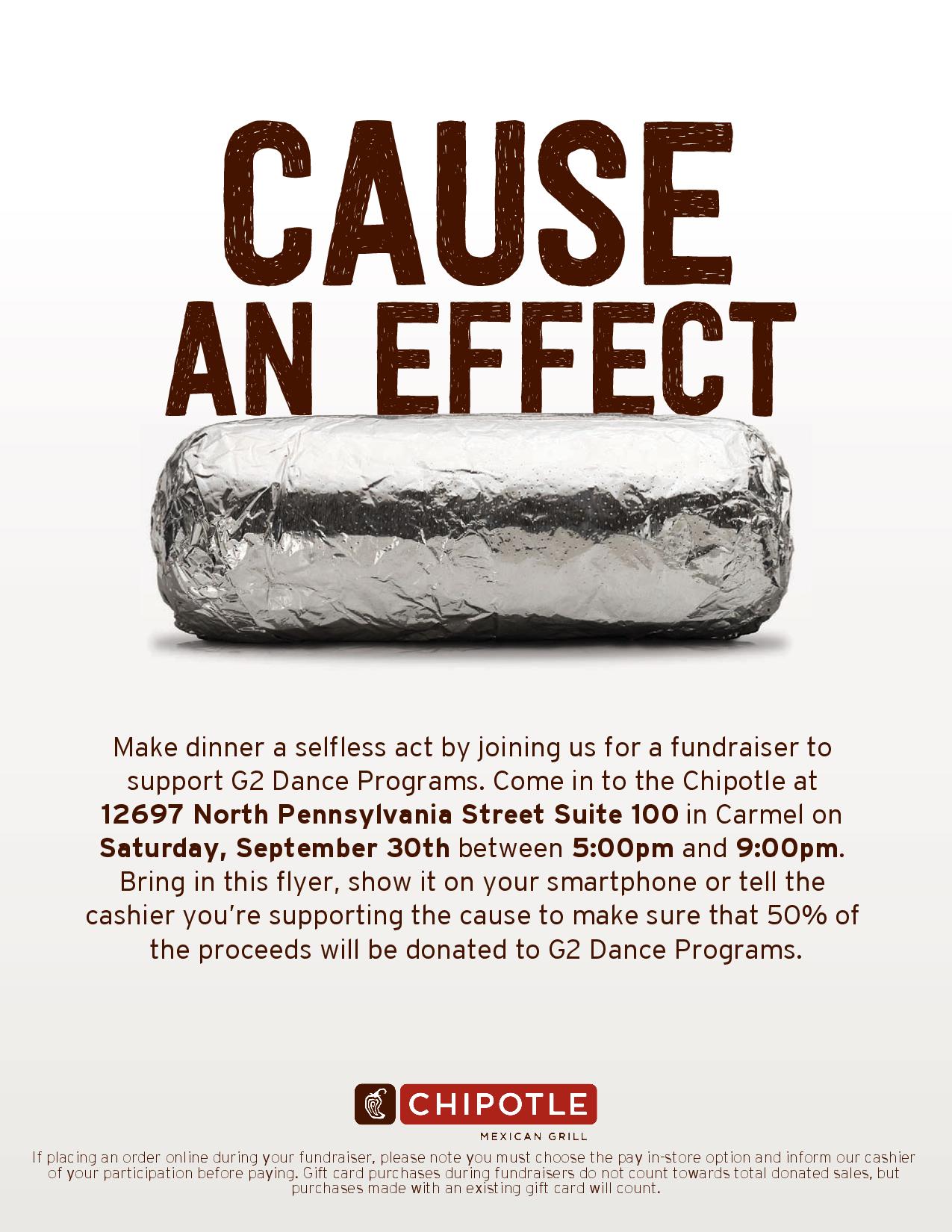 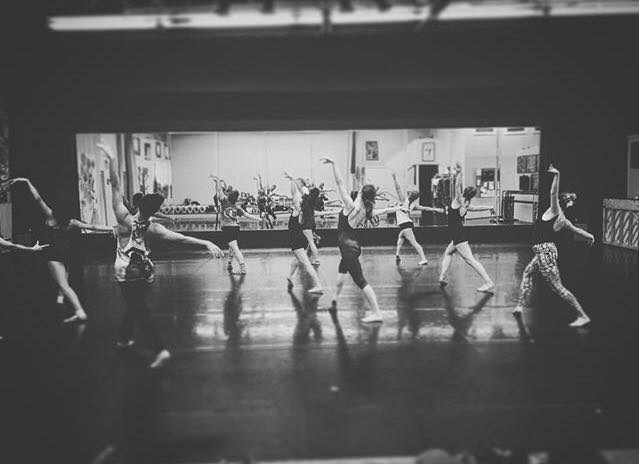 Come join The Academy of Gregory Hancock Dance Theatre for classes! We will have an open registration on August 5th, 2017, from 12:00PM – 3:00PM.

Our students also get multiple performance opportunities throughout the year. GHDT’s The Nutcracker is a student production, and the entire cast is made up of our students, as well as other dancers from the area. Open auditions for our 2017 Nutcracker are on August 19th, 2017, from 1:00PM – 2:00PM.

We also have an annual Academy Showcase in June, for parents to see how much their children have learned throughout the year. Occasionally, there are opportunities for our Academy students to perform in GHDT company shows. 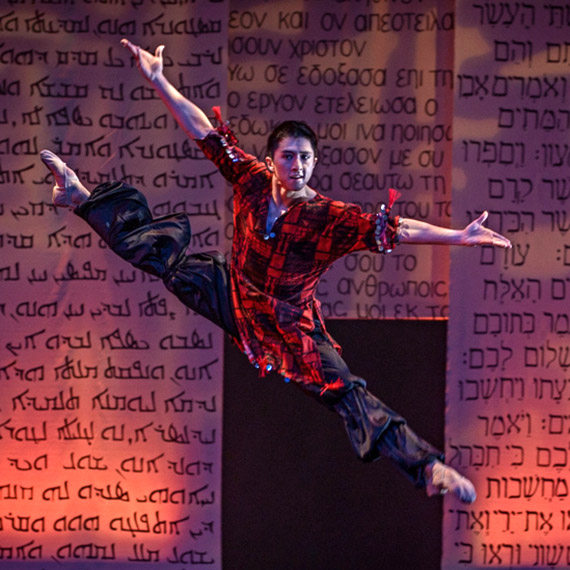 The Tarkington at The Center for the Performing Arts

SUPERHERO; the story of a man called Jesus
March 30-31, 2018
The Tarkington at The Center for the Performing Arts 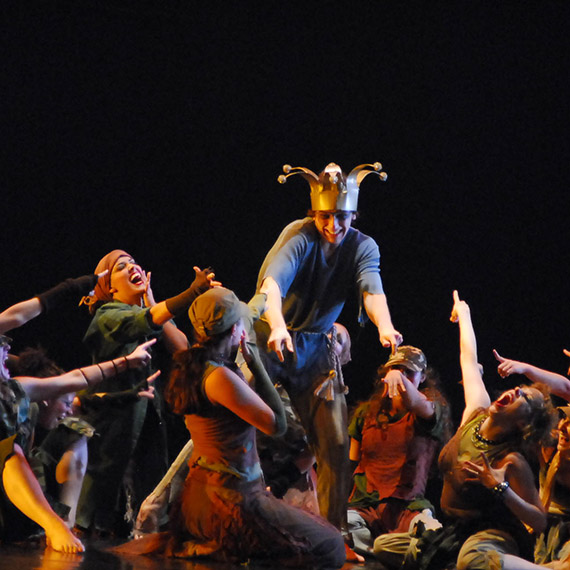 THE HUNCHBACK OF NOTRE DAME
June 29-30, 2018
The Tarkington at The Center for the Performing Arts 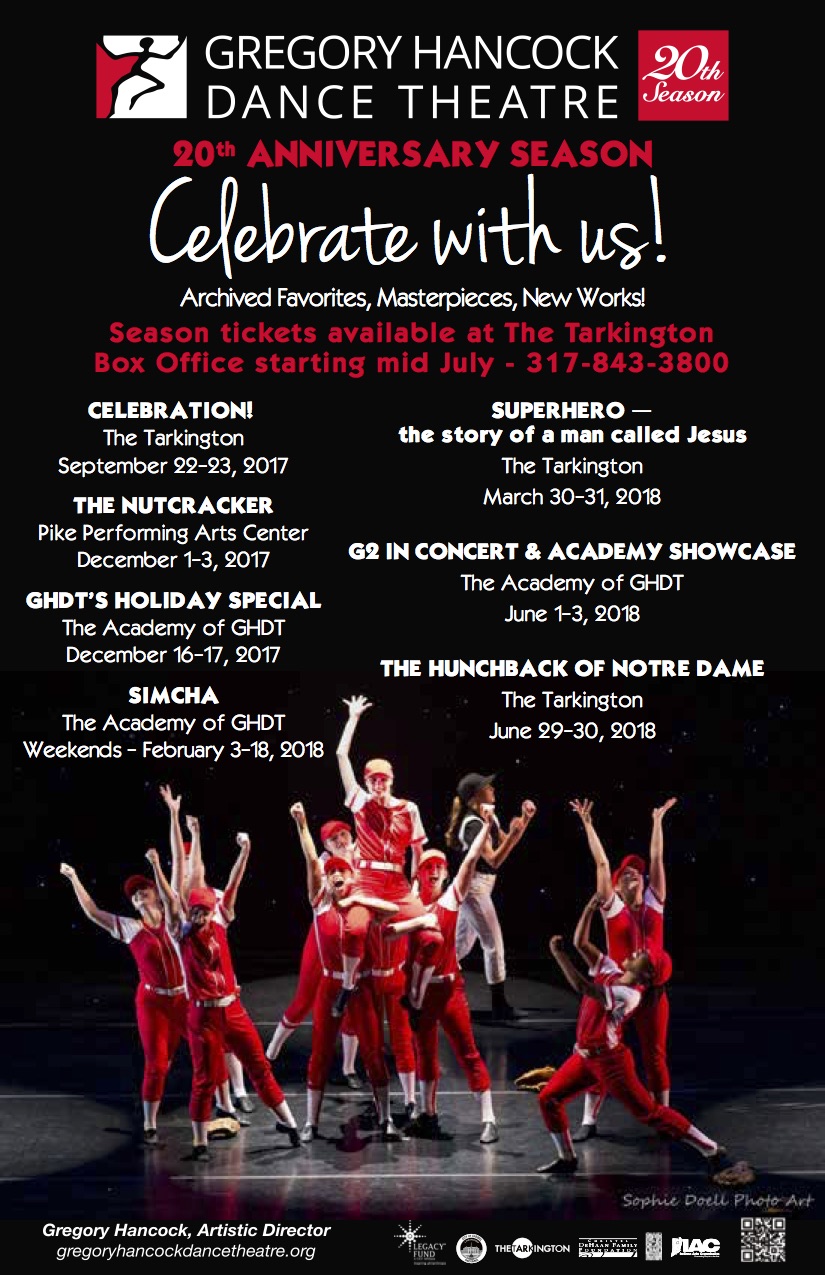 Gregory Hancock Dance Theatre’s artistic director, Gregory Hancock, is a jack of all trades. Mr.
Hancock wrote a musical, called La Casa Azul,  about Mexican artist Frida Kahlo. In 1997, it was copyrighted. However, the musical did not premiere until June 2015. The musical was such a success, it had an encore performance the following October. Our local PBS station, WFYI, filmed the performance and a documentary about the process of bringing the show to the stage. This 2016 broadcast, we are happy to announce, won a Regional Emmy for Best Arts Programming. 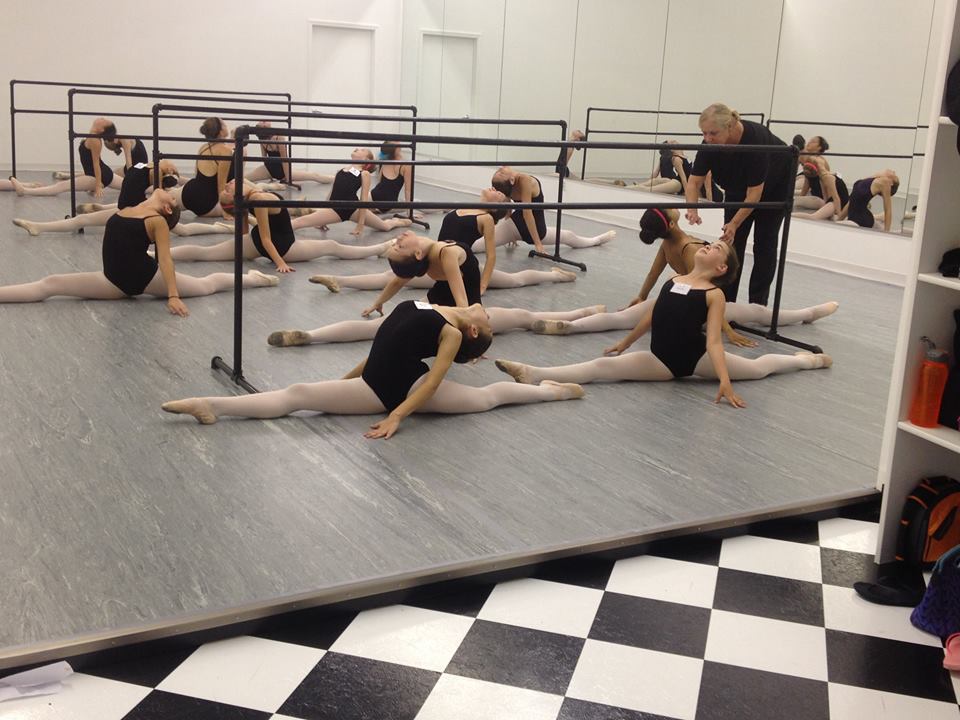 It’s that time of year again! The Gregory Hancock Dance Theatre Summer Intensives are back! This year, all levels have a 2-week long intensive. Our intensive is for dancers ages 6-18, and they will be separated according to age and level. From July 10-14th and July 17-22nd, dancers will take classes ranging from ballet to middle eastern dance, and terminology classes to conditioning. Dancers will be fully engaged in learning and having fun from 9am-4pm, Monday-Friday.

For information on dress code and prices, as well as the registration forms, head over to our Summer Intensives page. 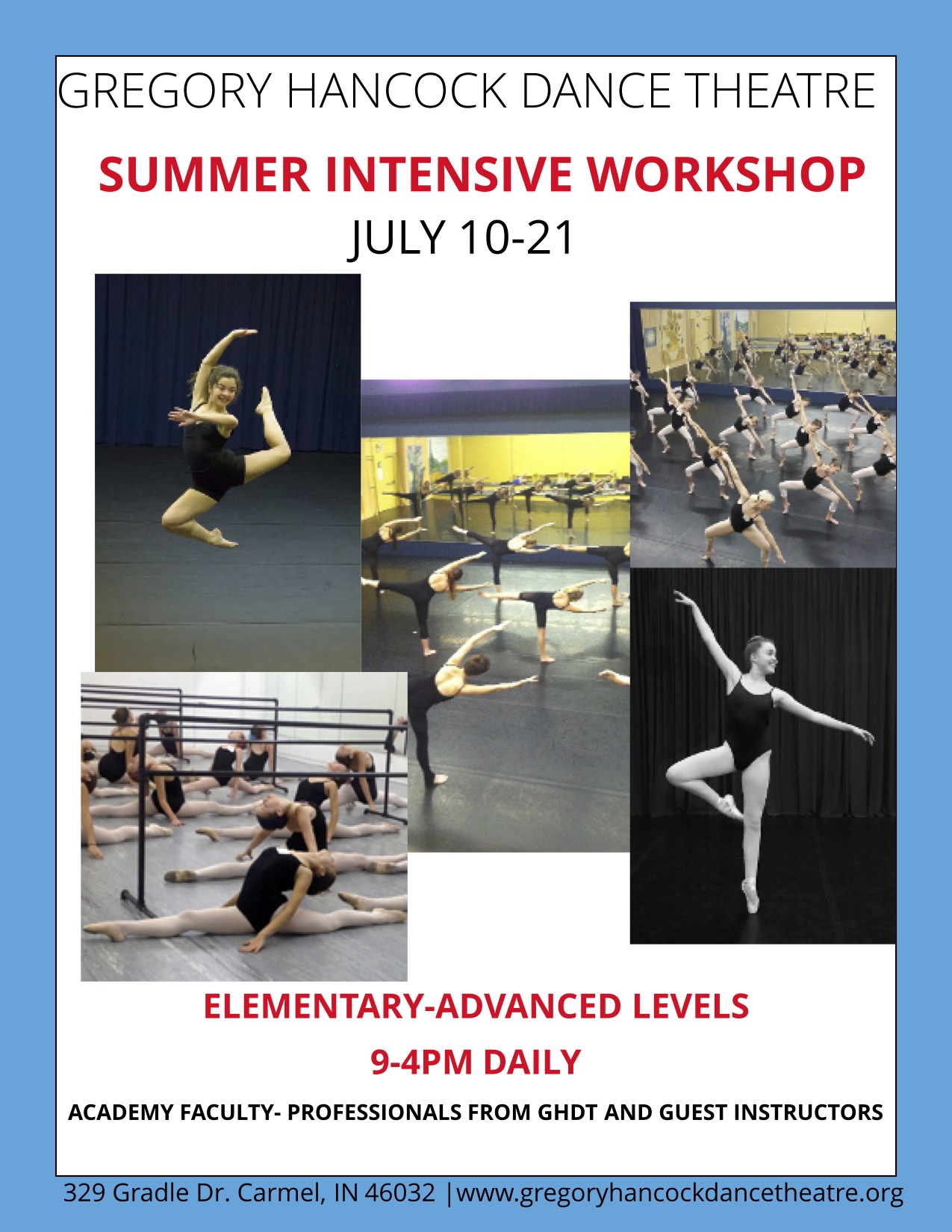 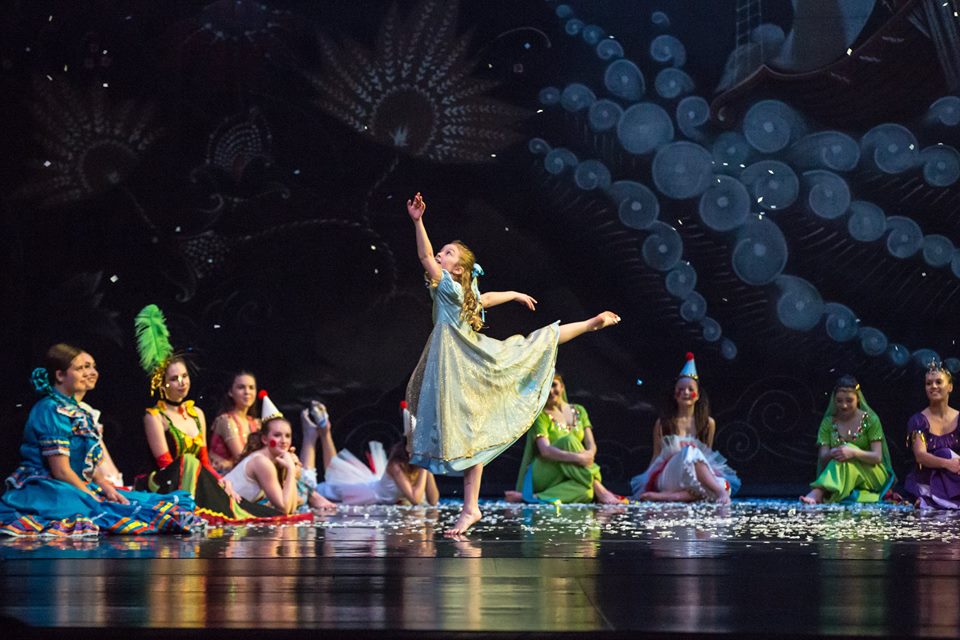 In addition to our annual Summer Intensive, this year we will also have a week long Nutcracker Bootcamp. GHDT’s Nutcracker is a very special tradition for many dancers and families. We want to give every dancer the chance to get a head start and learn every part of the show, all while having fun with their friends. The Nutcracker bootcamp is July 24-28th from 9am-4pm.

For more information, as well as registration forms, head over to our Summer Intensives page.

A Night in India PHOTOS

A Night in India Patron Photos

We had wonderful audiences who came to see A Night in India this past weekend at The Tarkington. We had some lovely vendors in the lobby, including a Taj Mahal Photo Booth with photos taken by Norma Junes Photography. Click here to find yours!

Thank you to all of the sponsors, vendors, patrons, board members, dancers, tech crew, and our director, Gregory Hancock. This weekend wouldn’t have gone the way it did without any piece of the puzzle.

Stay tuned for the reveal of our 20th Anniversary Season! 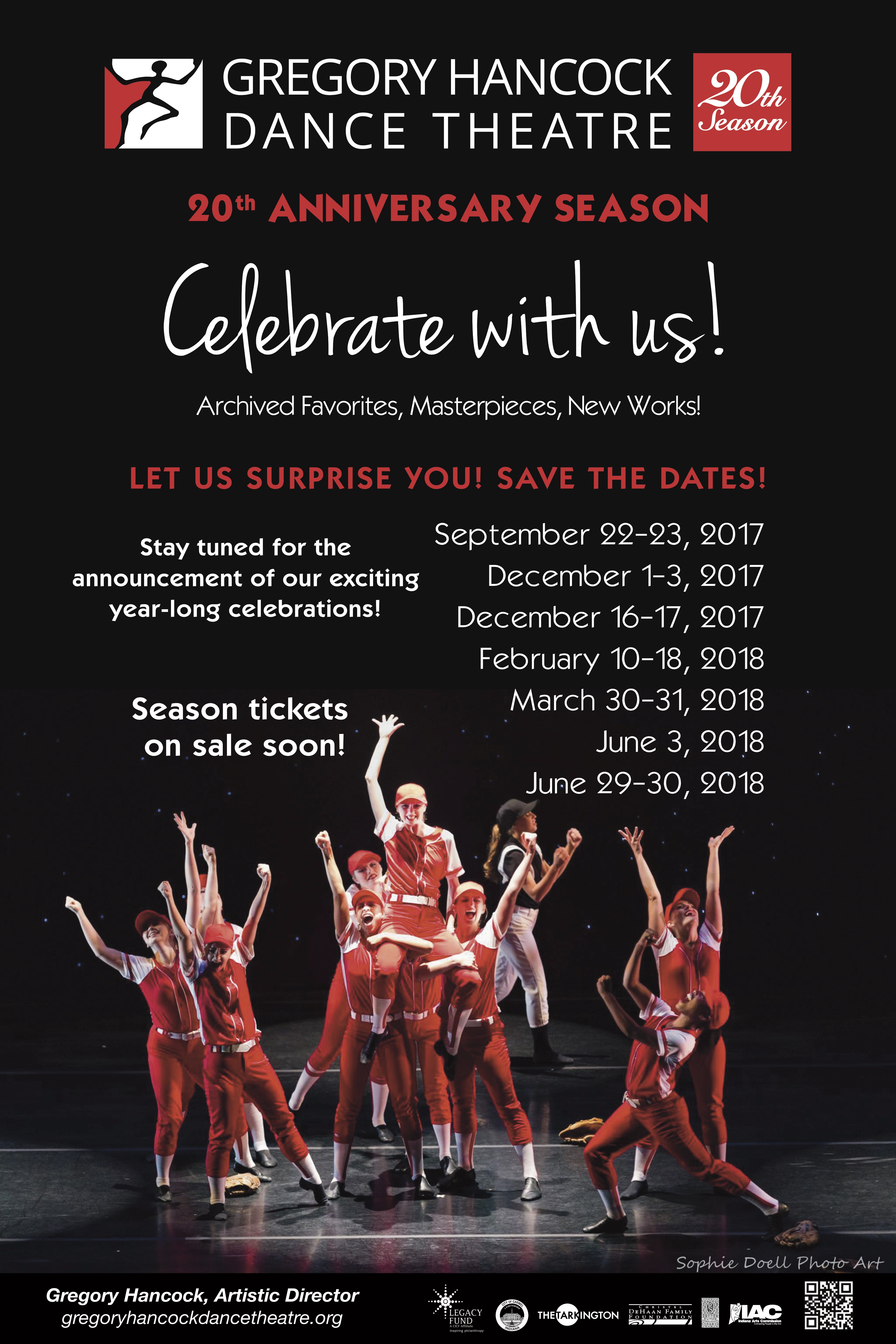